This website is strictly limited to those over 18 or of legal age in your jurisdiction, whichever is greater. This is the media debut shoot for yet another newhalf model Runa on our site. Runa works at a newhalf brothel (euphemized as `newhalf health` establishments in Japan) that is known for not permitting its girls to be seen in the media. I was rather happily surprised when she contacted me for the shoot.

Apparently Runa has been the top-selling girl at the Ueno-based brothel for the past 3 consecutive years. She has that innocent Lolita appeal that fulfils the guilty lust and makes her unforgettable. Her clients can only see her if they book her well in advance.

Runa is 21 years old. She was originally from Osaka but doesn`t speak with an Osaka accent because she moved to Saitama when she was young. Runa`s hobbies are music and travel. She plays the guitar, the piano and was once in a music band. She has vacationed overseas in Las Vegas and Indonesia but her ultimate dream is to travel to Canada to see the glaciers and the aurora borealis.

Runa likes men who are tall and look good in a suit. She is a big fan of Johnny Depp. 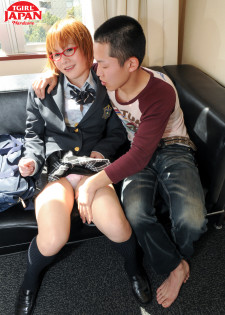